DF XXIII, 1, 2013: The Metaphysics of Positivism. Ed. by Luca Guidetti and Giuliana Mancuso

THE METAPHYSICS OF POSITIVISM 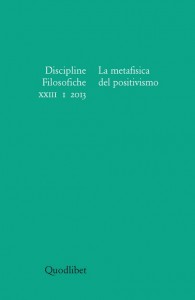 The first time Comte uses the word “positive” it is to describe on the basis of five meanings the new scientific methodology, as opposed to the idealistic dogmatism previously prevailing. A programmatic positive approach entails the investigation of what is “real”, “useful”, “certain”, “precise” and “opposed to negative”: regarding this last signification, as Comte points out, the true modern philosophy has to be called “positive” insofar as it is destined “not to destroy but to organize” (Discours sur l’esprit positif, 1844).These five meanings are captured by the rules of phenomenalism, nominalism, value-freedom, and methodological unity of science, which together form the normative framework of positivistic anti-metaphysics. The leading figures of positivistic movement had nevertheless to engage in a more careful and detailed account of their anti-metaphysical views, since the project of a radical empiricism together with the related opposition to all metaphysics would soon reveal themselves (as Quine’s well-known arguments also pointed out) to be based on implicitly held, and therefore dogmatic, principle assumptions. These assumptions consist first of all in making use of “real” as definiens for the other terms, in this way giving rise to the paradoxical effect that what experience is should be established on the basis of only one feature of experience itself: “factual” and “real” should hence constitute the unquestionable basis to reject as “metaphysical” all that is not “factual” and “real”. Together with this circulus in probando, positivism exhibits a more serious difficulty, which jeopardizes its logical and epistemological consistency: since the basis is phenomenal and it is therefore assumed that experience is immanent, the concept of truth takes on an objectivist shape, inasmuch as it depends on the receptive form of empirical data. To preserve truth against any possible drift in a transcendent direction, a normative model is surreptitiously introduced, according to which all that is inexpressible in terms of perceptual immanence should be discarded. Consequently any problem about experience as a whole turns out to be meaningless and the world of values (epistemological, moral, aesthetic ones) is reduced to mere biological response of human being as an animal to environmental stimuli. But how then does human aspiration to reason and metaphysical “certainty” originate? If significance criteria leave out all that is not phenomenal, positivism ends up going along with those views – such as philosophy of life and Bergsonism – according to which human being’s rationality is an evidence of biological decline or, on the contrary, which consider tendency to transcendence to be the outcome of an only spiritual element of the human nature. In its long history positivism has actually been able to rectify, broaden and make more “inclusive” its concept of experience by abandoning logical atomism together with the covertly metaphysical thesis that only what is singular exists and by redefining on a new logical-linguistic basis the criteria of meaningfulness. If meaning is not a given, but a rule governing the use of words, metaphysics is then not less “meaningful” than empirical sciences and is, therefore, legitimate, provided that its proposition should be conceived as having a not strictly cognitive import. According to this wittgensteinian theoretical framework, if the immanence thesis makes sense, then the position of transcendence makes sense as well. But the most important contribution of some positivist approaches to current philosophical inquiry is maybe that of regarding experience as a constitutive process the genesis of which should be investigated, together with its dynamic and functional features. In this way, instead of presenting itself as the source of any truth, metaphysical thinking turns into a characteristic of experience, i.e. one of its modalities. Conventionalism, relativism and constructivism can hence find, within the same worldview, a common ground with a metaphysics which is not subject to prejudice.From another point of view, the current debate in analytical philosophy shows that metaphysics can still be and actually is conceived exactly as an inquiry not less “cognitive” than natural sciences, but having different methods and, as subject matters, topics such as existence, identity, nature of properties, causality etc. Metaphysics so understood is nowadays in very good shape, in spite of quietist and deflationist views which give new life to old logical-positivist rejection of metaphysical disputes as meaningless or mere verbal conflicts between contrasting descriptions of the world without real import. These views are nonetheless themselves biased with unspoken metaphysical assumptions, which resemble mutatis mutandis those logical-empirical ones and,  as remarked by a positivist who was not scared of metaphysical commitments, “an unexamined metaphysics, that is, one implicitly held, is for a philosopher the worst metaphysics of all” (G. Bergmann).

CONTENTS
(click on the titles to view the abstracts)