Enzo Melandri was born in Genova on 14th April 1926. After attending a chemical technical school, on 1954 he obtained the school leaving certificate in classical studies. Then he attended the University of Bologna, taking a degree in philosophy under the supervision of Felice Battaglia on 1958. From 1958 to 1961 he was lecturer of Italian language at University of Kiel in Germany. On 1962 he got a position as contract professor in Theoretical Philosophy at the Faculty of “Lettere e Filosofia” (humanities) of University of Lecce; then, on 1963, he get a position as a contract professor at Faculty of Magistero (Education) of University of Bologna, in which he carried out his whole academic course, but for the period between 1972 and 1974, when – after obtaining the full professor position – he had also the teaching of Moral Philosophy at Faculty of “Lettere e Filosofia” of University of Trieste. Since 1983, his teaching was borrowed from Faculty of “Lettere e Filosofia” of University of Bologna. He died on 25th May 1993 in Faenza, where he lived. For a long period – since the last 1950s –, he joined his academic work together with a collaboration with Il Mulino Publisher, making translations, being the editor of many books, and publishing with it some of his most important works. On 1979 Melandri founded an interdisciplinary group for Leibnizian studies, that became “Sodalitas Leibnitiana” later on and was affiliated to Leibniz-Gesellschaft of Hannover. During the 1980s, he collaborated with “Centro di studi per la filosofia mitteleuropea”, located in Trento; on 1982 he took part to the foundation of Topoi, an international journal of philosophy. In the same years he started the Annali dell’Istituto di discipline filosofiche dell’università di Bologna, that became later on – since 1991 – a six-monthly journal, Discipline Filosofiche, of which he was the first editor-in-chief. 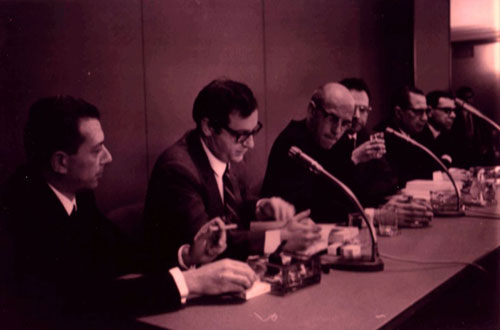